I recently had the opportunity to travel to Europe on a mission trip. It was not your standard mission trip to a place with no running water where you help build houses and such for communities.  No, this trip was about spending time and pouring into the families, specifically their children.  These long term missionaries leave their homes and the comfort and support of their families behind to move to a place, where they often don’t know the language, to create a place to live where they spread the love of Christ.

My group went there to look after all the children while the adults were in conference sessions for large time periods during the day/evening.  We were able to play games, enjoy the amazing playground facilities, and just let them be kids.  There were about 50 children total whose ages ranged from toddler to teenager; and let me tell you- They. Were. Awesome! 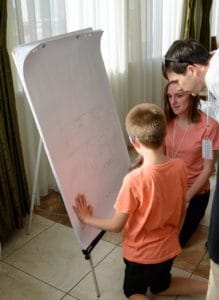 One day I spent some time with a child, named David, who knew my job was in architecture.  He told me about how he liked to draw and asked me to draw a house with him.  We ended up drawing a floor plan of a house together.  I asked him the typical things like what do you want it to look like or have in it? He drew as we talked making a theater room to one side, an art room for his big sister, guest rooms with multiple bunk beds (I’m talking like 6 bunk beds in one room), and a long hallway where they could line up all their shoes. His ideas were fun and imaginative, although he nearly forgot to add a bathroom to the house! Once he felt he was finished, he then moved on to another activity and person in our group.

His creativity and imagination were refreshing because I can often get bogged down with the function and minutiae of things.  This simple time we had together reminded me to embrace that childlike faith and imagination I once had because really great things can come from them! Remember to not disregard the small conversations or ideas because you never know the impact they might have on that other person; like David’s time with me.